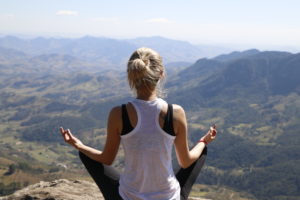 I have been divorced for two years, and have gone through much transformation as a result of my marriage ending.  For many years, I thought keeping the peace was the best way to navigate through troubling times.  I thought I could preserve the family unit by doing keeping the peace, but somethings are out of our control.

If you are the peace keeper, it’s a very hard habit to break.  We think that we’re actually doing our best by keeping the peace, but most of the time we’re just walking on eggshells allowing negative behaviors to occur, doing our best not to react.

But… does repressing emotions really make us better people?  I have concluded that it does not.

If you are living in a negative environment, no matter how much tiptoeing you do, you can not change that energy.  You can chose not to engage, but that person and that energy are still there.

I began dating someone several months after my ex and I parted ways.  I wasn’t looking to date anyone, but he showed interest and the attention made me feel good.  There were several red flags that this wasn’t a good idea, but I convinced myself that it was my nerves overreacting, and it very well may have been, but in retrospect it was my intuition.

I really wasn’t being treated the way that I wanted to, but resided in the fact that everyone who has reached this age was going to have a hard time finding true love.

Don’t get me wrong, It wasn’t all bad.  There were many good times that we shared, but my smile began to fade.

I searched and googled as much self help that I could find.  Everything I found indicated he wasn’t the one, but I kept at it for 11 months.

One of my favorite relationship authors is Jeff Brown.  He said that we often times will look for the person to work out the same unresolved issues that we had in our failed relationships.  I started seeing the truth there.  I was trying to keep the peace, again!

I had become a master at not taking offense to moodiness or lack of attention or affection.  I could overlook all of that because I knew there was a connection between the two of us.

After a couple of short breaks I finally did articulate to him what I needed.  I wanted to do this right.  Communicate without fear.  So I did.  He agreed to giving what I asked for.  When the opportunity arose for him to step up to that agreement, he withdrew and so did I.  It wasn’t that I was being too sensitive.  I wasn’t asking for a lot, in fact too little.  It was disrupting my peace of mind. It’s not that I didn’t care about him, it’s that I care for myself more.

One night, I was listening to this young man, Trent Shelton who has since become motivational coach. He said, protect your peace.  It made so much sense.  All of a sudden, it dawned on me… and keeping the peace was replaced by protecting it.

Don’t allow yourself to be subjected to anyone who doesn’t bring out the best in you.  Keep your circle small and only surround yourself with people who truly love you.  Stop making excuses for other people.  If they bring you down more than up, let them go.

That’s what I’m doing now.  I really do have some of the most amazing friends in my circle.  Several small circles of people who love me, support me, bring out the best in me, encourage me, and inspire me.  If this one guy can’t be a part of that, then it’s not the right fit.

To get through the lonely times of being single, I put less value on romantic love and more value on the love of my friends and family.

Protect your peace the way you would your flower garden, and watch how beautiful it will grow.